Getting started with Neovim

Text-wrangling is a big part of unlocking the power of Linux and programming. With great power comes the need for a great text editor!

I have used Vim in the past but barely scratched the surface of its features motherlode. A friend who is a passionate vim user recommended I try Neovim, which "strives to be a superset of Vim except for some intentionally-removed misfeatures... [and] is built for users who want the good parts of Vim, and more".

Neovim packages are available in Debian ... 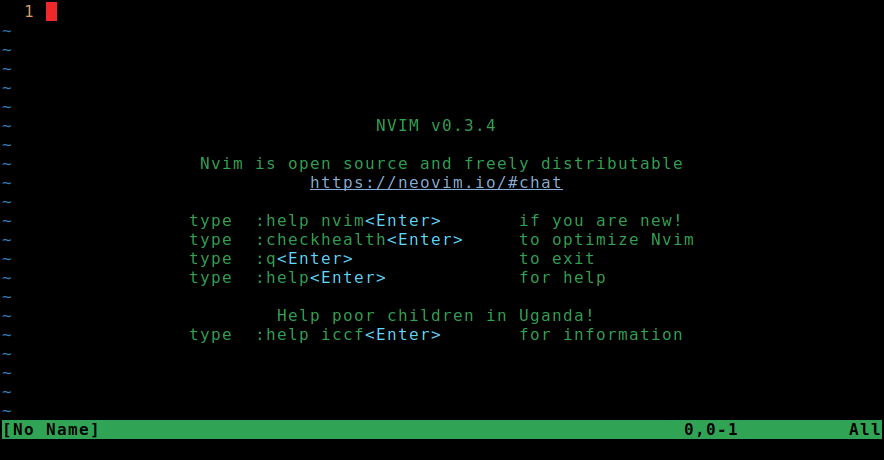 If you are a beginner not only to neovim but vim itself, the best place to start learning is the built-in tutorial. Type :Tutor and hit <Enter> to access. Spend a week getting comfortable with these oft-used commands and wrap your head around the concepts of modal editing and jumping between normal mode and insert mode.

Rather than downloading one of the many existing "cheatsheets", I recommend making your own composed of commands you wish to commit to memory.

On first launch the ~/.local/share/nvim/{shada,swap} directories are auto-generated. Manually create a new ~/.config/nvim directory and a init.vim configuration file ...

I use the default color scheme, which picks up colors I have defined in my ~/.Xresources. In my init.vim I add ...

Extra color schemes can be installed and made visible to :colorscheme. Create a colors directory to store schemes ...

I ran into the problem where the color scheme worked in the terminal but not inside a tmux session. Turns out tmux was not seeing the 256 color palette ...

It is important to kill all existing tmux sessions to see the changes take effect. It is not enough to simply start a fresh session.

I can create my own neovim commands using key maps. Because the editor doesn't have enough key combinations to remember ... 🐧

First I set a map leader key that I use to preface all my custom commands, which can be any key not already used by neovim (example: the comma key). I add to init.vim ...

Neovim has several modes and its possible to create a key map that works in any or all of them. My focus is on the normal (command) and insert (editing) modes.

To map keys that work only in normal mode, use the :nnoremap command. Example: A command to toggle the spell checker using ,s ...

When invoking an Ex command from a map, <CR> is added at the end.

To map keys that work only in insert mode, use the :inoremap command. Example: A command to insert a date+time stamp using ,d ...

<C-R>= is used to insert the result of an expression at the cursor.

Start with the built-in :Tutor and :help commands. Good stuff!

Following the tutor, the Vim Tips series was a big help in moving beyond simple editing tasks.

This article is a very clear explanation of the difference between buffers and windows and tabs in (neo)vim.