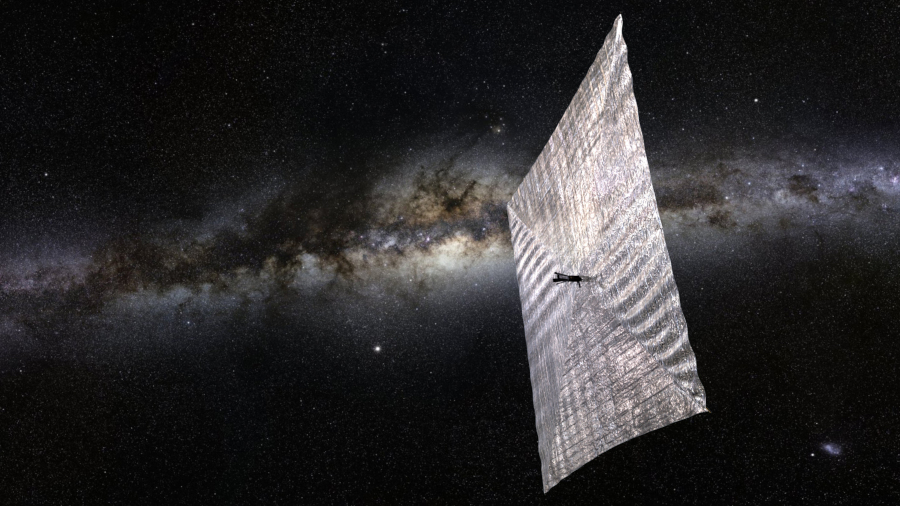 Imagine a new way to fly - in space - that uses no onboard fuel, no engine, and is capable of traveling far faster and cheaper than anything we have launched to date.

This is not a science fiction spacecraft. We've built it. Two weeks ago it left earth and is now in orbit preparing for its test flight.

In 1607 a comet appeared in the skies over Europe, capturing the attention of the astronomer Johannes Kepler. Kepler wondered what caused the comet's broad tail that arced gently across the sky. Sunlight, he thought, must be striking the comet and liberating material from its surface.

Though Kepler had no way to prove his hypothesis, it was an insightful - and ultimately correct - observation. Sunlight pushes on the ice and dust of a comet, scattering them in all directions. Some of the material escapes the comet's gravitational hold, creating a tail that extends off the comet. The idea of the sun's rays interacting with a celestial object led Kepler to imagine that a space sail might one day capture sunlight the way a boat sail catches the wind. In a letter to Galileo Galilei, Kepler wrote that humans might one day use the technology to set a course for the stars:

Provide ships or sails adapted to the heavenly breezes, and there will be some who will brave even that void.

Think of a traditional chemical rocket and of Newton's third law of motion: "for every action there is an equal and opposite reaction". So the thrust of the rocket - the momentum of the fuel being burned and expelled in one direction - pushes the rocket in the other direction. When the rocket burns up all its fuel its done. Most spacecraft reach their maximum speed and then coast through space or rely on gravity assists from other planets to reach their destinations.

But its possible to use a different source of energy. Sunlight!

Light is made up of particles called photons. Photons don't have mass, but as they travel through space they do have energy and momentum. Energy and momentum that can be transferred to other objects.

An object like a space sail. A solar sail.

When light hits a solar sail - which has a bright, mirror-like surface - the photons in that light bounce off the sail, like a reflection off a mirror. As the photons hit and bounce off the sail their momentum is transferred to it, giving it a small push. The effect is tiny - like tossing a paperclip against a bedsheet - but the sun is constantly emitting trillions of photons and - in the vacuum of space - there is nothing to slow down the sail. The accumulation of tiny pushes adds up. With solar sails, a spacecraft can continue accelerating as long as there is light pushing on it. Increasing velocity throughout its entire voyage and capable of reaching tremendous speeds.

When a solar sail faces the Sun directly, photons push the spacecraft forward, away from the Sun. But a solar sail can move in other directions by tacking like a sailboat, changing the angle of the sail relative to the Sun.

In theory. So let's put it to the test!

The Planetary Society is a nonprofit advocacy group that promotes the exploration of space, and they have a history with solar sail-powered craft: a failed launch attempt in 2005, and a demonstrator craft - called LightSail 1 - placed in low earth orbit in 2015. Four years ago on the crowdfunding site Kickstarter, they proposed building and launching a more ambitious craft called LightSail 2. They raised $7 million dollars from 40,000 private contributors - myself among them - in amounts from as little as $5 to a single anonymous donation of $1 million.

Two weeks ago, a night launch aboard a SpaceX Falcon Heavy rocket successfully took LightSail 2 to space. The spacecraft is currently circling the earth. Its about the size of a loaf of bread and - tucked inside - is a solar sail of extremely reflective material that unfolds to about the size of a boxing ring and is only microns thick.

Barring any last minute complications - LightSail 2 will deploy its sail later this week or next. It will begin turning the sail into and away from the Sun's rays each orbit, giving the spacecraft a gentle push. The goal is to raise the spacecraft's orbit by a measurable amount over the course of a month using nothing but the power supplied by the sun. Reaching those higher orbits has traditionally been expensive. Solar sailing - if it works - would radically lower the cost. Not just making earth orbit more accessible, but open up the solar system for exploration and development.

And, one day, even farther still. Its an elegant technology. A beautiful notion.

In the first age of sail we crossed oceans and explored the earth.

Now we stand at the dawn of a second great age of sail that will see us traverse the space between the stars.